I was invited by Rajendra Singh and Anupam Mishra in the first meeting for idea discussions; I was also invited to the first meet of the advisors. Laurent Fournier, a French architect, was the first director of the institute, but he resigned after a couple of months. Gopal Singh became the director of the Tarun Jal Vidyapeeth.

I had initiated an idea of a community university, the Asha University with Dr Sandeep Pandey, Magsaysay recipient. According to my understanding, the society must have community universities and institutions. I liked the idea of Tarun Jal Vidyapeeth, TJV.

I joined Tarun Jal Vidyapeeth, TJV, Tarun Bharat Sangh, TBS as a faculty and the course coordinator for the founding year. TJV had courses for Diploma, Degree and Doctorate programmes. TJV got around 35 students for the founding year from various states of India including the northeastern states. Some students were not able to understand Hindi or English, and communication was challenging with them. But together, we all ran TJV very well.

It was a good experience in my life. I had an opportunity to work with Indian youths of various states/ languages/ age-groups, who did not understand my language but somehow we explored the methods for communicating with each other. 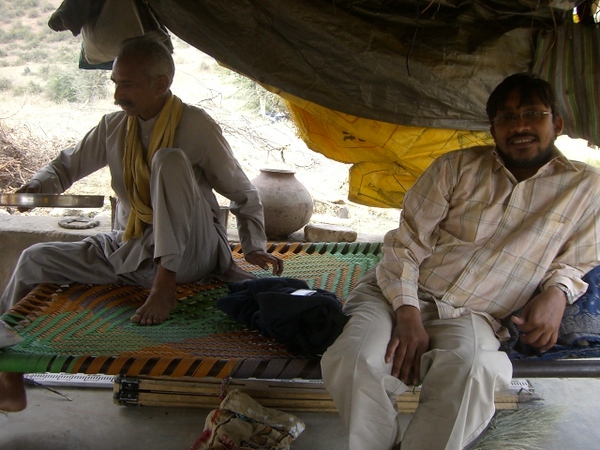 Claire Glendenning with a villager in a field campus. (Dr Claire joined river department of the Australia Government with Australian Public Service after working with some global organizations in USA, Asia and Africa.)

Drug-addict students and my experiment

We had students from the age of fifteen years to thirty-five years. Most of their families were hopeless for them, and this is why with hope for their future they sent them to us.

Many of students were smoking, using tobacco, drugs, GANJA (hashish) and alcohol. I took responsibility to motivate them for the social volunteering with self-control and feeling of brotherhood for all members of society. I started with forming the honest and heartily relationship with them; motivated them to leave their drug-habits without giving them any anti-drug medicine.

For developing self-control, I motivated them not to use salt in food for at least one month. For mutual brotherhood, also motivating for the social ownership from the conditioning of individual ownership, I motivated them to clean each other's clothes and food plates even using study materials and other kinds of stuff with no personal ownership. After some time, they did not know, who owns what thus they were caring things as their own with the best efforts.

I left TJV in the founding year. TJV stopped to run residential study programs some months after my departure from TJV. Some students of this unique batch are working on water issues with various organisations, some went for higher studies and some are self-employed; a couple of them are working in overseas. A few of them are working outside India. All of them are living a life with more politeness, honesty and with social responsibility.